Let’s talk about Quartz! In this blog post we’re going to be diving into different structures as well as surface characteristics of Quartz family crystals. But first, before we begin, I want to give an official and very important disclaimer that I am in no way an expert on any of this information and that everything in this blog post is from research as well as personal knowledge I have learned over the course of collecting and being interested in crystals. It is also important to note that I have only touched the surface of the more factual/scientific/geographical information on these formations and characteristics, and that there are many other formations and characteristics that occur in Quartz than mentioned here. Even though I have listed metaphysical qualities for each of these, I encourage everyone to find their own meanings and interpretations of these pieces. All crystals have something different to teach us, and its important to tune into our crystals to see what exactly that is.

A twin is a crystal that has two terminations caused by two crystals growing parallel from the same base. Twin crystals are also called Tantric Twins or Soulmate crystals. Quartz crystals can also have what is called an internal twin, which can’t be seen by the eye, but there are several external factors that indicate a point has internal twinning. 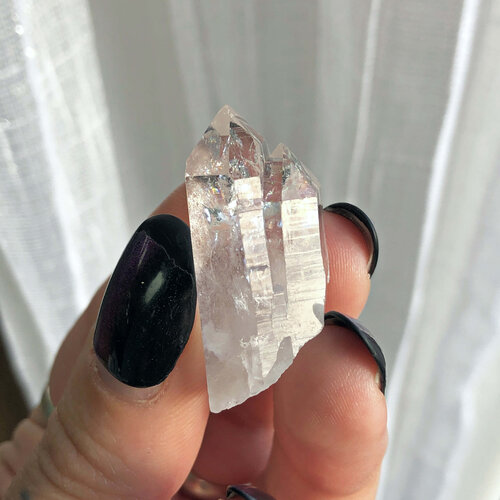 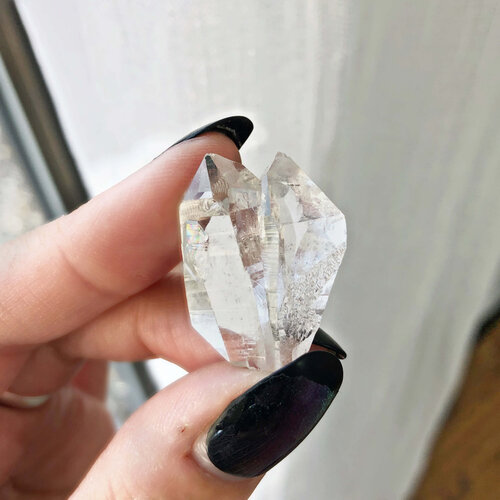 Also called a DT crystal for short. These types of crystals have a termination or point on both ends and can be found naturally or carved to be this shape like a wand. Since there is no base, energy flows from both ends of DT crystals and resembles the balance of giving and receiving.

Self healed crystals are crystals that have broken off of the original matrix they began forming from. This is where they get their other common name “floater”. This occurs due to various movements and shifts in the Earth (ex. earthquakes) as well as other things such as environment, pressure, and other crystals forming nearby. Once a crystal breaks off, it continues to grow over the broken end.

There are many stages of self healing. More underdeveloped self healed pieces will usually appear to be more flat with subtle scaley or triangular formations covering the area, they can be identified by moving around in various angles in the light. Other stages will have more established raised points like in the photo above. Some crystals are self healed to the point that they become a double terminated crystal.

Also known as Skeletal or Crocodile Quartz. Elestials are skeletal looking crystals with layers of terminations all over the surface. The general appearance of these crystals consists of layered geometric patterns, depressions/cavities, and raised terminations. This formation occurs during the crystallization process where there was unstable conditions as well as the faces forming slower than the edges. Elestials are notorious for having water inclusions because of their internal cavities.

Also called Lightbrary Quartz, Cathedral Quartz gets its name from its appearance closely resembling buttresses on cathedral architecture. It’s structure is essentially a crystal with several smaller crystal points that lead into one main crystal termination. The smaller points may or may not be completely formed or whole and grow/sit parallel to the main crystal body.

A chisel tip is when a the termination of a crystal is flat at the top and not in the shape of a traditional point. Also sometimes called “shovel tip” Quartz due to its resemblance of a shovel.

A Penetratoris a quartz point that grew into another point and can usually be seen on the inside depending on the clarity of the piece or angle of the penetrator. A Manifestation Quartz is similar to a penetrator, but there is no visible entry point of the secondary crystal growth and the point is enclosed entirely within the crystal. As the name hints, it almost looks like the crystal growth manifested within the main crystal.

A key in a Quartz crystal is caused when two crystals grew closely to one another, but is no longer intact or attached to the crystal, they look like a moulding or impression of another crystal that was growing next to it/within it, the key is visual evidence of this occurrence.  The key can be perpendicular, where you can see the 6 sides of another crystal formation and it looks like a hexagon, or it can be more vertical or parallel and appear more elongated.

An imprint is similar to a key, but has a much larger surface area and is caused by several crystals growing in close proximity and crowding. Rather than being a random isolated impression, imprints can actually alter the entire shape of the crystal.

Some say Record Keepers have the ability to appear out of nowhere or move around, I’ve personally experienced finding a record keeper on a crystal I have never seen prior. It is possible that we simply just missed them on our first glance, but I prefer to believe they hold a little bit of magic in that sense.

Sometimes referred to as barcodes, Striations are parallel raised ridges or steps found on the lower faces of Quartz crystals, very rarely striations can be found on the upper faces of the crystal. They are commonly associated with Lemurian Seed Quartz, however, striations can be found on many other types of crystals in addition to Lemurian Quartz such as normal Quartz, Amethyst, Citrine, and even Pyrite and Apophyllite. They can be subtle or very pronounced and can be distinguished very easily on a crystal.

Etching appears as markings on the exterior of a crystal where minerals have been washed away by hydrothermic water during its formation. Etching is completely unique to each crystal and vary in amount, size, and level of depth that has eroded. Starbrariesare etchings that are exclusive on Lemurian Quartz, which are mined in Minas Gerais, Brazil and Columbia. They have a glyph-like appearance to them or geometric symbols/patterns. A lot of the starbrary markings look like asteroids falling from the sky or some kind of space-like scene.

An Isis face is a crystal face with five sides. The five faces have perfect or near perfect symmetry.

A window is a small four sided diamond shape that intersects between the upper faces that lead to the termination (“R” and “Z” faces) and the lower faces (“M” faces). The window is called the "S” face of the crystal. Each side of the window face is even or equal in size, this is how to differentiate between windows and timelinks.